Earth systems are complex, dynamic and inter-related in nature. And so are the problems that the Earth is faced with today. We have often been seeking solutions that are simple, easy and unidimensional. With the earth racing towards becoming home to a 9 Billion population by 2050 and increasing competition for land, water, resources and energy, there are rising concerns of global food security and increasing stress on water resources. Traditional policymaking and governance structures have dealt with each of these in silos, not taking into consideration their interconnectedness. Even when it comes to individual action, the popular solutions have been restricted to To-Dos of switching off lights to save energy, not wasting food, and turning off taps to save water. Agreed. All of these steps are important. But what if these constitute just the tip of the much larger iceberg? The larger iceberg of the Nexus between Food, Energy, and Water? The seemingly simple systems that exist around us are connected to a deeper network of dependencies and that is why moving away from dealing with sectors in isolation and moving towards a Nexus approach is crucial. To achieve the three pillars of sustainable development one such complex nexus lies at the crux: The Water-Energy-Food nexus.

The hidden water in everything!

Everything you can see around has caused a significant amount of water to be extracted, consumed and polluted in the process of making it. This is referred to as the Water Footprint. The price tag deceptively reduces the product to only its economic value, blurring out the energy and water that has gone into making it. A single pair of jeans requires anywhere between 6000 to 11,000 liters of water to make. How is that? The Water footprint of the jeans takes into consideration the water that is needed to grow the cotton, wash it and dye it, along with the water consumed by all other stages of its production in between. We can use the same example to illustrate three types of water footprints:

Green water footprint: The evaporative flow of water that is used for human purposes (growing cotton, in this case) which if left to itself would have otherwise flowed in natural systems and nourished natural ecosystems.

Blue water footprint: The water withdrawn and consumed from aquifers, rivers or groundwater. In this case, for washing the cotton, spinning and processing it.

Grey water footprint: The water that is polluted and released back into water bodies either directly from the factory or indirectly through diffusion or runoff, leading to degradation in its quality. In the case of jeans manufacturing, chemical dyeing would be the major contributor to grey water footprint.

The water consumed in all these stages is also called Virtual Water and helps understand how global trade has enabled water-scarce countries to import water-intensive goods and products from other countries. The global freshwater withdrawals have been increasing multifold over the past few decades owing not just to population explosion, but also due to dietary choices, intensive agriculture, industrial use and high consumption lifestyle patterns.

Water is the most fundamental input to agriculture. The largest global freshwater withdrawal is towards growing our food, which accounts for 69% of the total freshwater withdrawals. This includes both rain-fed as well as pumped irrigation for agriculture. According to the FAO, 60% more food will need to be produced to meet the needs of the growing population by 2050, along with balancing nutritional requirements and accommodating dietary preferences. With chronic water shortage already a manifestation in many parts of the world, sustainable use of water, especially in the agriculture sector is of high priority.

Drip irrigation, regenerative agricultural practices, permaculture, precision farming and even practices like mulching and composting increase the water retention capacity of the soil, and go a long way in reducing the amount of water consumed in the growing of food. Crop diversification and cultivation of less water consuming food grains like millets can reduce water consumption. Most crops that have low water needs are also climate change resilient, making it a good strategy for climate change adaptation in the food sector.

In the context of the water requirement of food, it is interesting to note the stark variation in water consumed by vegetarian and meat-based foods:

1 kg of tomatoes, on the other hand, requires less than 300 liters

In addition to its disproportionately large water footprint which is also due to the embedded water footprint of its feed, another much-debated issue is, low-income countries from the African regions selling their food grains to feed livestock in the USA and other developed countries, when their own country is battling hunger and malnutrition.

At almost every step along the agri-food chain, energy is consumed, making food production, one of the largest consumers of electricity. Energy is required to pump water for irrigation, produce fertilizers and pesticides, harvest crops, transport, distribute, store food, and importantly, in food processing. In 2011, the FAO released an issue paper titled “ENERGY-SMART” FOOD FOR PEOPLE AND CLIMATE” in which the high dependency of the food sector on fossil fuels is addressed and strategies for decoupling them is discussed. Energy affects food prices as well as food security as poor farmers are most vulnerable to changes in the prices of oil, gas, and carbon. Global food supply and consumption take one-third of the total end-use energy, making food waste another major contributor to energy waste as globally, over one-third of the food that is produced, is wasted.

There is opportunity aplenty at every step in the agrifood chain to increase energy efficiency and reduce energy consumption. For example, NPK and Potash blended fertilizers have very high embedded energy during manufacture (in addition to being highly polluting). Replacing them with local compost, manures & growing leguminous plants can reduce energy inputs in the form of fertilizers as well as save energy spent on transporting it to the farm. Processing of food requires energy for heating, cooling, packaging, and cold storage. This report that explores potential low-carbon paths in agrifood chains states that “the energy needed for ‘beyond the farm gate’ operations globally totals around three times the energy used ‘behind the farm gate’ ” , which is, to grow the food. Small scale renewable energy based setups behind the farmgate, or locally, say for drying and cold storage can significantly reduce post harvest loss (and energy wastage), but also increase farmer incomes. 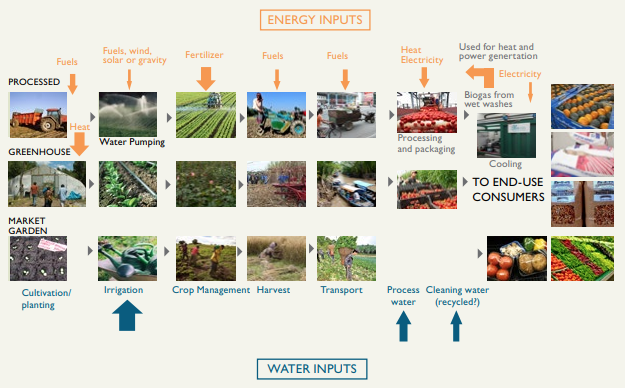 The generation of energy from agricultural waste, biomass, and food processing plants can be used for decentralized on-site production of electricity and heat. Renewable energy sources such as wind, solar and hydro are generally available on most farmlands. Biomass has the potential for local renewable energy generation and can bring co-benefits to stakeholders in rural communities. Direct generation of energy from food crops however also draws criticism, given the global hunger scenario and debates on using crops for food versus fuel arise.

Water and energy systems are inextricably dependent on each other. Water is essential for different stages of power generation, with power generation accounting for 44% of total global water withdrawals. The volume of water consumed per unit of electricity generation depends on the source. About 80% of global energy production still comes from fossil fuels such as coal, natural gas, and oil, which is a very water thirsty affair. The heat energy used to burn fossil fuels is then used in the thermal power stations to convert water into high-pressure steam for driving turbines. The steam is then cooled and condensed into water before being reheated to drive the turbines again. The process of cooling also required huge amounts of water at a lower temperature to pass through in exchangers. In power generation, the water withdrawn from adjacent water bodies, is to be sent back to the water bodies after passing through the various components for power generation, without changing its physical or chemical qualities, that may adversely affect aquatic life. For example, sending the withdrawn water back at higher temperature causes thermal pollution and causes serious ecological imbalance by disrupting the sensitive aquatic life. Water consumed in electricity generation, is the water that is lost due to evaporation. Fossil fuel plants require humongous amounts of water for cooling in addition to the water already used for extraction, mining, processing, refining and disposal of fossil-fuel residues. 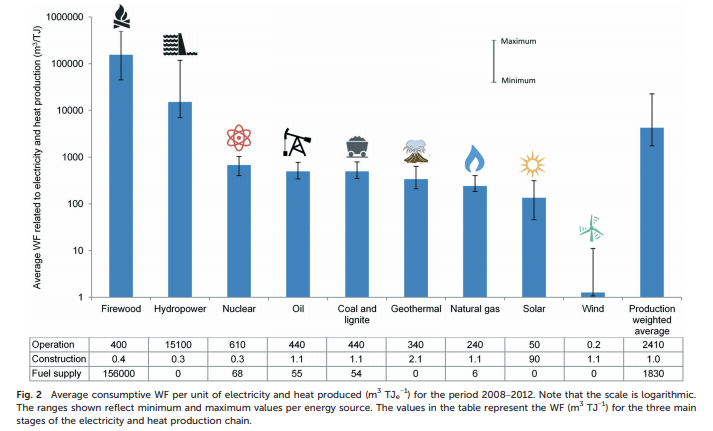 Hydropower plants again, only ‘withdraw’ water to rotate their turbines. Renewable energy sources such as solar and wind not just reduce greenhouse gases, but also water consumption during operation. The water sector consumes energy for purposes such as water treatment, pumping, and desalination.

Compartmentalized dealing by different departments and ministries of countries has in the past led to conflicting policies and strategies within the intrinsically linked Food-Water-Energy space. Heavy subsidy on electricity for pumping water and free power supply for agriculture, has led to overexploitation of groundwater resources by promoting wasteful use of water and cultivation of water-intensive crops in many parts of India. This is one example of threatening long term water security while striving to achieve food security. To build synergies across different sectors and achieve food, water, and energy security, there is a need for coherent governance structures and integrated management based on the Nexus approach.

[1] “The Water-Energy-Food Nexus: A new approach in support of food security and sustainable agriculture” (PDF). Food and Agriculture Organization of the United Nations. 2014. Retrieved 2019-02-07.