On this auspicious Guru Poornima we are humbled to share that, we have the blessed fortune of receiving Shri Adi Shankara Bhagavatpada Vigraham to be kept in our new Kriya Dhyanalayam space. We prostrate before the unrivaled jnani who consecrated the whole land of bharatavarsha through his immense tapobala and lived a life of seva. Through his selfless service he consolidated sanatana dharma and initiated different sanyasa sampradayas who are dedicated towards betterment of humanity. With a thousand pranams we take this opportunity to touch upon excerpts from the life history of the karmavedantin and an accomplished guru, who was revered as an amsa of lord shiva himself, where (in the writer’s limited understanding/intellect) he shines as an ideal disciple. This article tries to shed light into a few of the many instances in his life history where we get to see the hard choices he made, the qualities he inculcated and the effort he had exerted to walk the path of divine.

In the village of Veliyanad, Kalady, in Kerala Shri Adi Sankara  was born to Aryambal and Sivaguru Nambudiri as a fruit of 48 days vrata observed towards the deity lord Vadakkunathan. During the 48th night the couple had identical dreams where lord shiva appeared and asked if they would like a number of dumb children or one son with true intelligence who will live short. The couple had left lord shiva to decide as he knew best, in their respective dreams. The offspring who was born on the birth star of ‘Arudra’ was named as ‘shankara’ where sam means auspicious karathi means giver.

Sankara had his upanayana samskara at the young age of five and was initiated into brahmacharya. Among many other nithya karmas one of the important ones in the life of a brahmachari is to get biksha from different houses and submit it to the guru which the guru distributes later to all his students. During one such times on a dwadashi day he visited the house of a really poor woman who had saved only a small amla to have after her ekadashi upavasa. Looking at the tender brahmachari at the house entrance she gave away her only amla fruit to him answering to the call ‘bhavati bikshaam dehi’. Young Shankara was deeply moved by this selfless act of the poor woman reinforcing the principles of daana. His heart overflowed with daya and karuna (compassion & benevolence) making him to invoke the deity Shri Mahalakshmi. In praise of the deity he sings the famous kanakadhara stotram and it is said that it rained golden amlas over the poor woman’s hut absolving her of the misery. 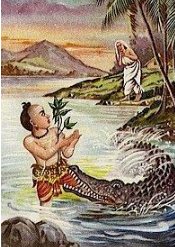 At the age of eight shankara had already finished the study of veda and his heart was inclined towards becoming an ascetic. He had to get the consent of his mother who did not agree to her only child taking up sanyasa at this tender age. One morning when shankara was bathing in the river a crocodile caught one of his feet and was dragging him into the deep. When shankara shouted for help his mother came running but could not do anything about the tragic situation. Even during such a critical time because of his dhruda nischaya (firm resolve) he was reasoning out with his mother that due to his prarabda(past karma) his life will end now and he was seeking her permission to let him take up sanyasrama so that he could live, as change of asrama(stage of life) means taking a new birth. Aryamba with desire for his son’s life agreed reluctantly. The moment she consented Shankara resorted to apat-sanyasa(becoming an ascetic at times of danger) and suddenly the crocodile changed its form to that of a gandarva, praising shankara and few away. Shankara gives his word to a grief-stricken Aryamba that whenever she thinks of him he would be by her side and promises to perform the last rites on her death. 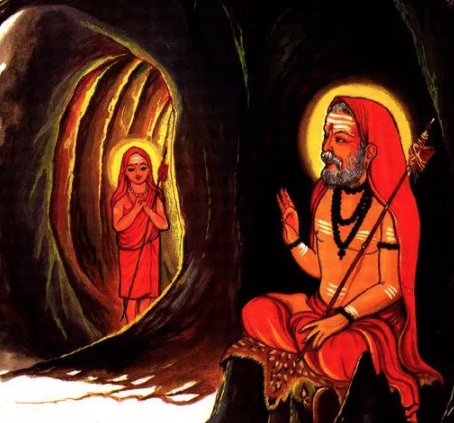 Shankara was now already a serious aspirant and was seeking the truth. He had undergone all the right preparations to be a supatra(refined receptacle). After 4 years of seeking he had arrived at the banks of Narmada near Omkareshwar where he was directed to meet the illustrious saint Shri Govinda Bhagavatpada who was in deep samadhi inside a cave whose entrance was closed with a large boulder with only a small opening at the bottom. It is said that Narmada was flooding that time and Adi Shankara caught all of Narmada in his kamandalu to avoid it from filling the cave in which the saint was in penance, such was his prowess. He waited outside the entrance of the cave for months and one day when Shri Govinda Bhagavatpada questions who is it waiting outside he chants the famous Nirvana Shatakam to express how he is nothing but the pure consciousness – the Atman, using the neti logic (not this / negation). Shri Govinda Bhagavatpada was very pleased after listening and understands the preparation that shankara has undergone by just the look of his feet through the crevice. He then stretches his feet outside the same crevice and declares that ‘I see your preparation form your feet. Now hold mine tightly’. That is how Shankara wins the heart of an accomplished saint though his Shraddha, humility and strenuous consistent effort and gets accepted as a disciple .

Shankara trains under Shri Govinda Bhagavatpada for 3 years. He was a sincere disciple and gets diksha on all the Mahavakyas from his guru. At an appropriate time Shankara gets formally initiated into sanyasa by guru Shri Govinda Bhagavatpada whose guru is Shri Gaudapada. This sampradaya traces it’s lineage from the Sharada Peetham Matha(mutt). He adorns the name of Shri Adi Shankara Bhagavatpada during his sanyasrama. He accepts his guru’s wish, to spread advaita vedanta for strongly establishing sanatana dharma, as a command and resolves to do so. Shri Bhagavatpada swamigal had by then attained the state of Ahamkara Shunya (dissolution of ‘I’ness/ego) that when his guru expressed his wish he could immediately  act upon it tirelessly without any slightest doubt or second thoughts. He had become that hollow vessel (instrument) through which the divine could flow. 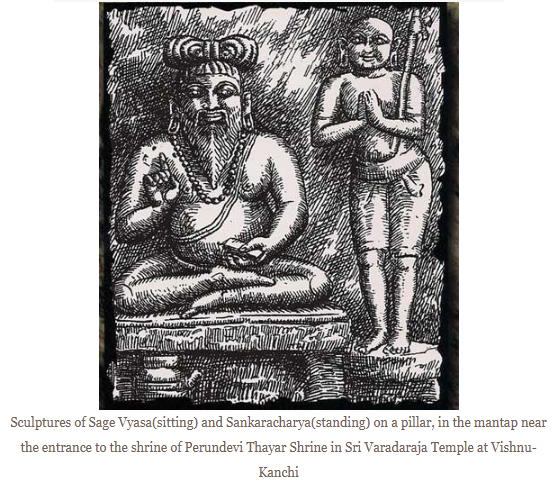 Brahman alone is real, this world is unreal; the Jiva(individuated consciousness) is identical with Brahman. Which would mean that there is no difference between self and this world. It is important to note that despite this belief his act of submission with respect to Vyasa Maharishi is a striking proof of living the words ‘advaitam guru na saha’. Which translates to never practice advaitam with your guru or advaitam (the principle of non-duality) does not apply to one’s guru. 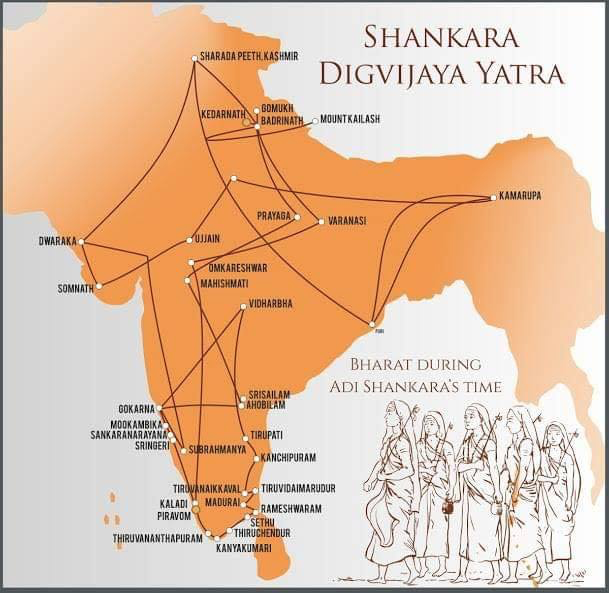 Shri Adi Shankara incessantly travelled the length and breadth of bharathavarsha and was a parivrajakAcarya (parivrajaka means to wander/travel, acarya – teacher) to spread and consolidate sanatana dharma. He had established 4 main mathas(mutts) across the land in Dwaraka(Gujarat), Sringeri(Karnataka), Puri(Odisha), Joshi Mutt(Uttarakhand) which are of slightly different traditions all operating under the framework of Sanatana Dharma. The 10 definitive sanyasa orders (dashanami) with suffixes such as that of saraswati, Tirtha, Bharati, Puri, Asrama, Giri, Parvata, Sagar etc., and the popular shakta tradition of Kashmir, the valiant nagasadhus were all organised by Shri Adi Shankara Bhagavatpada inorder to protect and uphold sanatana dharma. The Paramahamsa title implies the highest of these grades among the dashanami sanyasis. It is possible to become a Paramahamsa by a long course of Vedantic study, meditation and Self- realisation. The Ativarnashramis are beyond caste and order of life. They dine with all classes of people. Sankara’s Sannyasins are diverse and can be found all over India.

After establishing these mathas and assigning his 4 chief disciples as head to these he took abode at Kanchi Mutt(Tamil Nadu). These mathas through their selfless service, continuously work for leading all of humanity towards jnana(true realisation) and hence moksha(liberation). Bharatavarsha is trodden with such great rishis and seers who walked the face of this planet for the cause of lokasamgraha (welfare of the world). It is to such benevolent gurus that we owe our lifetimes to, who through their mathrubhava help one swim across this samsara sagara.

Meaning: Salutation to the lineage starting with lord Sadasiva, with Shri Adi Shankara in the middle and continuing up to my immediate teacher. May the Guru Parampara guide us.