The deep interconnectedness between Man and Nature has been celebrated in our culture for centuries. In every aspect of life, through simple yet deep rituals and practices, this interconnection is brought to the forefront. We as a civilization have never subscribed to the theory of Man dominating and exploiting Nature, but have evolved systems and best practices that bring forth an inclusive, integrated and holistic vision. A glimpse of our Itihasas and Puranas, our treasure trove of knowledge, will give one an overview of the Indian ecological worldview. To a sincere seeker who delves deep into it with shraddha, the promise and assurance of experience of this interconnectedness is presented. The beauty, intelligence and robustness of the Indian tradition has been in its demonstrated ability to translate Vedantic truths of unity and oneness into simple rituals that can be followed by ordinary people in everyday life. In this series, we will look at various ecological references in our Itihasas and how they are relevant in today’s times.

In the Anushasana Parva of Mahabharatha, after the great war, King Yuddhistira, on the advice of Shri Krishna, approaches Bhishma Pitamaha to learn from his rich experience and knowledge in different fields. They discuss at length on the various aspects of governance and the nuances of Dharma.

Yudhishtira is keen to know from Bhishma himself, the rewards one would receive for planting trees and digging tanks. Laying great emphasis on the merits of planting trees, Bhishma explains that planting trees is hailed as a great act of charity, and would lead to fame and wellness in this world and beyond. The trees that one plants become his children.

“Do thou, therefore, plant trees, O Yudhishthira! The trees that a man plants become the planter’s children. There is no doubt about this. Departing from this world, such a man ascends to Heaven. Verily many eternal regions of bliss become his. Trees gratify the deities by their flowers; the Pitris by their fruits; and all guests and strangers by the shadow they give. Kinnaras and Uragas and Rakshasas and deities and Gandharvas and human beings, as also Rishis, all have recourse to trees as their refuge. Trees that bear flowers and fruits gratify all men. The planter of trees is rescued in the next world by the trees he plants like children rescuing their own father. Therefore, the man that is desirous of achieving his own good, should plant trees by the side of tanks and cherish them like his own children.” 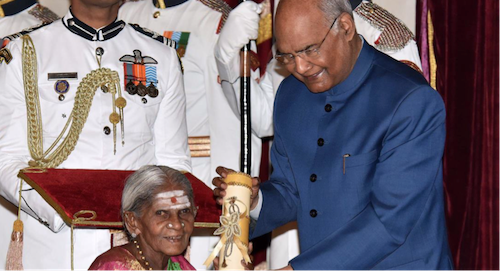 This also reminds one of Padma Shri. “Saalumarada” Thimmakka, a 105 year old environmental activist from Karnataka who has planted, nurtured and taken care of over 385 Banyan trees and 800 other trees as her own children.

Bhishma describes six types of plants and different kinds of vegetables that need to be grown.

~ Trinas – Grasses and plants of that type

Bhishma then goes on to expound the method of digging tanks, its importance and merits. “A piece of land that is agreeable to the sight, fertile, situated in the midst of delightful scenes adorned with diverse kinds of metals, and inhabited by all sorts of creatures, is regarded as the foremost of sports. A particular portion of such land should be selected for digging a tank.” The excavation of a tank will lead to water getting stored during the rainy season, and will create a nourishing ecosystem to the delight of insects, birds and animals. He also explains the importance of landscaping and surrounding the water bodies with trees and says that building such tanks would lead to the aggregate of three: Dharma (Righteousness), Artha (Wealth) and Kama (Pleasure). Bhishma refers to the Puranas to mention what merits one would accumulate by planting trees and digging wells in comparison with performing various Yajnas.

Safeguarding the rich biodiversity that this land is blessed with requires a multi pronged strategy. In the Hindu tradition, forests were classified into three types : Tapovana: The Sanskrit word tapas means penance and vana means forest. This type of forest was accessible to Rishis and Tapasvis and not to all people. The Rishis lived in sync with nature and spent their time in deep meditation and yogic practices. There are many stories in our Itihasas and Puranas of sages meditating amidst dense forests in caves. Many sages also had disciples and some had educational institutions with hundreds of disciples. Simple living meant that their presence in the forests would place no burden on it as they neither had to harvest or exploit natural resources. Many Great Epics were narrated by sages in the forests. The Mahabharatha is narrated in the Naimisha Aranya by the great Saunaka Rishi amidst the congregation of many Rishis. The Tapovana forests were called Rakshas or protected sanctuaries for the animals.

Mahavana: The great natural forests were called Mahavana. Home to a rich variety of flora and fauna, these dense forests were also Rakshas or protected sanctuaries.

Sreevana: These were ‘forests of prosperity’. A combination of natural forests and groves, these spaces were open to people from the neighbouring villages and communities and they could grow fruit bearing trees, medicinal plants and herbs, harvest timber, collect dry leaves from this area. This ensured that the natural dense forests were not cleared by people for cultivation.