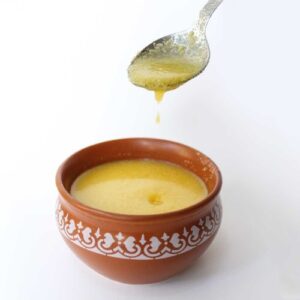 According to Ashtanga Hrudayam, one of the primary texts of Ayurveda, cow ghee is considered the best among all fats. In the Indian tradition, ghee is considered to be highly purifying and is used in yajnas and spiritual rituals. It is prepared by boiling milk, allowed to cool and then set to curdle. It is then churned to extract butter (and buttermilk). The butter is then heated to obtain ghee. The method followed in the West differs. The cream is collected from milk and directly heated to make ghee. In the Indian method, since the process of fermentation is involved, it does not increase kapha much and therefore cholestrol levels remain in balance. On the other hand, ghee prepared by directly heating cream is hard to digest [1].

Ghee balances vata and pitta. It enhances the digestive power and hence the transformation of dhatu, enhancing the quality of the reproductive fluid and Ojah at the end of the dhatu transformation process. Ojah is the overall vitality and cellular immunity which leads to longevity. Ghee is detoxifying in nature. It improves intelligence and memory. It is used for vata imbalance conditions like anxiety and excessive thoughts. It helps in removing excess kapha and vata dosha and clears the srotas or channels of circulation in the body[2]. Ayurveda talks of different channels such as anna vaha srotas, the channel for food (gastrointestinal tract), prana vaha srotas, the respiratory channel, rakta vaha srotas, channel for blood, etc. The mind is also looked at as part of the physiology of the body, and is called the mano vaha srotas, or the channel of the mind. The mano vaha srotah includes the chakra system, which are dynamic centers that process emotions and thoughts.

In fact, a mention of the effect of ghee and cow products on the mind is found in the Anushasana parva of the Mahabharata. Bheeshma recounts a dialogue between King Saudasa of the Ikshvaku dynasty and his kula guru, Vasishta who talks about how one can overcome bad dreams, negative psychological conditions and fear by revering cows, bathing using cow dung and eating cow ghee [3].

As therapy, ghee is used in the treatment of fever, dryness, eye disorders, for improving vision and eye health, reproductive disorders, wounds and bleeding. Ghee has the unique property of being able to absorb the active constituents of a herb into it, without losing its own inherent quality. This characteristic is called yogavahi. Ghee is administered with different herbs for a wide range of health conditions [2].

Can this neurocognitive link be found in modern medical research? Yes. Cow milk and ghee are naturally rich in omega-3 fatty acids, as we have seen. Docasahexanoic acid or DHA is a type of omega-3 fat that supports brain and nervous system function and eye health. In a study comparing the fatty acid composition of ghee prepared using the traditional method and the direct cream method, it was found that DHA content was significantly higher in ghee prepared using the traditional Ayurvedic method using curd starter fermentation [4].

Recent research has shown that the human brain is nearly 60% fat and fatty acids are the most important molecules that determine the brain’s integrity and performance. DHA is the most abundant fatty acid in the brain, found in high concentrations in the membranes and vesicles of neuronal synpases (location where a neuron passes an electrical or chemical signal to another neuron). DHA plays an important role in basic processes that influence cognitive development such as synaptic efficacy, rate of transmission and myelination. Myelin is a fatty substance that surrounds the axons or “wires” of nerve cells. They insulate them and increase the rate and efficiency of electrical transmission, allowing for more complex brain processes. Myelination is a process that is vital for a healthy central nervous system [5].

Studies have associated higher levels of omega-3 and DHA to decreased incidence of Alzheimer’s disease and preserved brain volume in regions vulnerable to the Alzheimer’s [7]. DHA is important for brain and retinal tissue development in babies both during the fetal and post natal period. Hence the mother’s diet during pregnancy and lactation should include adequate DHA content [8].

Inflammation, caused by dysregulation of the immune system response, is thought to be at the root of all chronic diseases. Omega-3 fats such as DHA have anti-inflammatory effects, which is the reason why the Mediterranean diet, which consists of foods such as fatty fish rich in Omega-3, has become popular with nutritionists and health-conscious individuals. Therefore consuming a diet with adequate supply of DHA may reduce the incidence of chronic diseases that involve inflammatory processes such as heart disease, cancer, inflammatory bowel disease and rheumatoid arthritis [9].

The sperm or male reproductive cell has a high proportion of poly unsaturated fatty acids which play a critical role in fertilization. DHA is the predominant poly unsaturated fatty acid in human sperm cell. It has been found that the sperm fatty acids are very sensitive to dietary intake of Omega-3 fats, and low DHA is the most common cause of infertility problems. One can correlate this fact with the therapeutic use of ghee in Ayurveda for enhancing the quality of sperm[10]. Benefits of curd as per Ayurveda

Curd, commonly known as dahi or thayir, is a fermented product of cow’s milk and is commonly found in the daily diet of Indians. It is prepared by boiling and cooling the milk to about 30 – 40 °C and adding a spoonful of starter curd, which contains lactic acid bacteria. This temperature range is favourable for the bacteria to multiply and ferment the milk in a few hours to form curd. According to Ayurveda, curd has sour taste (amla), balances vata and increases kapha and pitta. The Charaka Samhita says that curd increases meda or fat, improves digestion and increases strength and immunity. It possesses the bowel binding property known as grahi, and hence it is used as a home remedy for treating diarrhoea. Curd consumption at night is not recommended since there is a natural predominance of kapha in the body at the time and eating curd will further increase kapha leading to many complications. [11]

Churned curd (or curd blended with water) is buttermilk and is one of the most widely used dietary articles for treatment in Ayurveda. It is said that buttermilk is to humans what Amrita, the divine nectar, is to the devas. Ayurveda uses buttermilk to maintain health and to treat diseases. Buttermilk has sour (amla) and astringent (kashaya) tastes and balances vata and kapha. Buttermilk from cow’s milk stimulates the digestive fire and imparts intellect. It is useful in the treatment of inflammation, digestive disorders, gastrointestinal disorders, spleen disorders and anaemia. [12]

It is well-established that the human gut microbiota plays a crucial role in digestion and nutrient absorption. In light of this, consumption of probiotic food preparations such as curd and yogurt has become very popular. In a study that evaluated the probiotic potential of 15 strains of lactic acid bacteria present in home-made curd in south India, it was found that most strains of the lactic acid bacteria exhibited probiotic properties such as resistance to acid exposure (pH 3.0), pancreatin and bile salts. They were also resistant to most antimicrobials tested. Further, they were found to inhibit the growth of Salmonella Typhimurium, a pathogenic bacteria that causes inflammation of the lining of the intestine (gastroenteritis).[13]

Curd is a good source of protein, calcium, phosphorus, iodine, zinc, potassium, vitamin B2, B5 and B12. Vitamin B12 plays an essential role in the proper functioning of the brain and nervous system and in the production of red blood cells (RBCs) and DNA, the genetic material of the cell. Deficiency of this vitamin is quite common. Vitamin B12 also helps prevent a type of anemia called megaloblastic anemia, characterized by muscle weakness and fatigue. [14]

A team of Indian scientists from the University of Davanagere, IIT Bombay and Mumbai, and Central Food Technological Research Institute (CFTRI), Mysore, did a study to isolate health promoting probiotic bacteria in curd samples prepared from the milk of Malnad Gidda cows. The Malnad Gidda is a small breed of cow native to the Malenadu region of the Western Ghats in Karnataka and whose milk and urine are known for their medicinal value. The lactic acid bacteria in the curd were evaluated for their aflatoxin binding and probiotic properties.

Aflatoxins are toxic substances produced by a certain type of mould called Aspergillus that can contaminate food crops and pose a serious threat to human and livestock health. Most human exposure comes from contaminated grains like wheat and nuts like peanuts, and their derived products. The effects of consumption could vary from a mild stomach ache to cancer, if ingested over a long period of time. They are potent carcinogens (cancer-promoting) and could affect all organ systems, especially the liver and kidneys, and cause liver cancer. AFB1 is known to be carcinogenic in humans. They also damage the DNA, cause mutations and birth defects in children. [15]

Thirty-four strains of Lactobacillus sp. (a major part of the lactic acid bacteria group) were isolated from curd samples. Upon characterization, four strains, called Lactobacillus fermentum, were different from the rest in terms of food intake and their DNA. The L. fermentum strains were found to be effective in removing the Aflatoxin B1 (AFB1) from the culture mediums with an absorption capacity of above 75%.[16]

In addition to removing aflatoxin, the Lactobacillus fermentum also exhibited probiotic properties such as inhibiting the growth of harmful bacteria such as Salmonella ebony, Staphylococcus aureus, Escherichia coli, and Pseudomonas aeruginosa, and ability to tolerate acidic pH, salt, and bile, which assures its survival in the environment of the intestine. Hence, these bacteria can be used in probiotic formulations for humans either alone or with other beneficial bacterial isolates. [16]