– Month based on lunar cycle

– Month based on solar cycle

The Julian and Gregorian calendars

We have looked at the fundamentals of astronomy. Let us understand how timekeeping is related to the astronomical cycles or patterns.

For that, we will first need to answer the question,”What is the basis of the day, month and year, which we refer to for every human activity anywhere in the world?”

The day, month and year in timekeeping is synchronized with the cycles of celestial objects in the sky.
Now, there are variations in the way these cycles are measured, which are important to know for understanding the difference between the Western and Vedic system of timekeeping.

The zodiac used in the Western system, called the tropical zodiac, is no longer based on the stars. It does not correspond to observable positions. The beginning of the tropical zodiac, 0° Aries, is identical with the vernal equinox, the place of the sun on the first day of spring, not with any fixed stars.
The tropical zodiac is not based upon the stars but on the orientation of the earth to the sun. The Tropics of Cancer and Capricorn denote the places of the sun at the summer and winter solstices.

Thus, the seasons mark the cardinal points of the tropical zodiac.
The name tropical comes from the Greek word “tropikos” meaning “turn”. The Tropics of Cancer and Capricorn mark the extreme north and south latitudes (+23.5° and -23.5°) where the sun appears directly overhead on solstices, and where it appears to “turn” in its annual seasonal motion. (Dakshinayana and Uttarayana in Vedic astronomy).

The zodiac that corresponds to the actual constellations or the fixed stars is called the sidereal zodiac. The Vedic system uses the sidereal zodiac.
The Vedic zodiac regards the beginning of Aries 0° as the actual constellation Aries, which is measured using the nakshatra Revati. (Sri Yukteshwar uses this method).
Another method to determine 0° Aries is to use the nakshatra Chitra and place the beginning of the zodiac exactly opposite or 180° from it.
The word sidereal comes from the Latin word “sidus” meaning “star”.

The tropical zodiac is not the real zodiac because, the orientation of the equinoxes with respect to the distant stars changes over time, due to the precession of the earth on its axis (as we have seen). Over a period of 24,000 years, the vernal equinox point traverses the full circuit of the actual zodiac. Hence, according to the Western system, the starting point of Aries also traverses the full circuit.
Around 2000 years ago, when Western astrology was in its formative stages, the two zodiacs coincided. Since then, because of precession, the two zodiacs have been slowly moving apart. Therefore, the tropical zodiac shows the actual astronomical positions of some 2000 years ago, not the current astronomical positions. Solar day begins at noon 12:00 hours. The earth has to rotate more than 360° for the sun to come back to noon. (As explained below)

The difference is because the earth moves a little in its orbit during the time it takes to spin once around its axis. Hence the earth needs to turn a little more than 360° to face the sun at the original position. (Shown in Fig. 2) The lines pointing to the distant star are parallel because the star is located at infinity, as viewed from the earth.

Note that “hour” and “minute” referred to here are based on solar time. 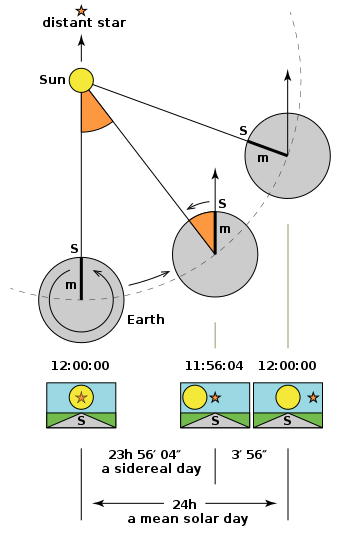 Tropical year
A tropical year (also known as a solar year) is the time that the sun takes to return to the same position in the cycle of seasons, as seen from Earth – the time from vernal equinox to vernal equinox.

The tropical year is the interval at which seasons repeat and is the basis for the calendar year.

The words “moon” and “month” have a common etymological origin. In many traditions of the world, the cycles of moon phases are used to reckon time.

Month based on lunar cycle

The tropical month is 27.32158 days, very slightly shorter than the sidereal month (27.32166) days, because of precession of the equinoxes.

Sidereal month
The sidereal month is the moon’s orbital period around the earth with respect to the fixed stars.

Synodic month
A synodic month is the most familiar lunar cycle, defined as the time interval between two consecutive occurrences of a particular phase of the moon, such as new moon or full moon, as seen by an observer on Earth.
The mean length of the synodic month is 29 days, 12 hours, 44 minutes (29.53059 days).

Month based on solar cycle

The months based on solar cycle do not correspond to the cycles of the moon phases. Rather, the 12 months are based on the entry of the sun into each of the 12 rashis. The 30° of each rashi correspond to approximately 30 days in a month.

In the Gregorian calendar, the sun’s entry into 15th degree of a rashi marks the start of the month. The month ends when the sun enters the 15th degree of the next rashi.

This is explained in Part 3 of this article.

A lunisolar calendar is a calendar that is based on both the solar and lunar cycles. It indicates both the moon phase and the time of the solar year (location of the sun in the ecliptic).

It is interesting to see that almost all ancient civilizations of the world had calendars based on both lunar and solar cycles, before the adoption of the Julian and Gregorian calendars during the era of colonization.

The Julian and Gregorian Calendars

History of the Julian calendar

The ancient Romans borrowed the idea of a 10-month calendar from the ancient Greeks. Their first organized year had 10 months, each with 30 or 31 days. The four 31-day months were called “full” (pleni) and the others “hollow” (cavi). It had 304 days and the remaining 50 odd days were left unaccounted for. (Table 1)

The 10-month calendar was allowed to shift until the summer and winter months were completely misplaced, at which time additional days belonging to no month were simply inserted into the calendar until it seemed things were restored to their proper place.

Table 1 : The 10-month calendar of the ancient Romans

The names Quintilis through December are derived from the Latin words for five through ten. This was known as the calendar of Romulus, the first legendary king of Rome.

To account for the remaining days, Januarius was added to the beginning of the year and Februarius to the end of the year during Numa’s reign around 700 B.C. Numa Pompilius was the second legendary king of Rome. The calendar stayed in that order until 452 B.C. when a small council of Romans, called the Decemvirs, moved February to follow January.

It was in the year 46 BC that the famous Roman general Julius Caesar modified the Roman calendar. His calendar, known as the Julian calendar, was based on the solar cycle. He was the one who introduced the concept of leap year. Julius Caesar made each month have either 30 or 31 days, with the exception of Februarius, which had 29 days and gained an extra day every 4th year. The month Quintilis was later renamed Julius in his honor. Likewise, Sextilis later became Augustus to honor Augustus Caesar, the heir of Julius Caesar. Augustus was also given an extra day (taken away from Februarius), so that Augustus and Julius would have an equal number of days. 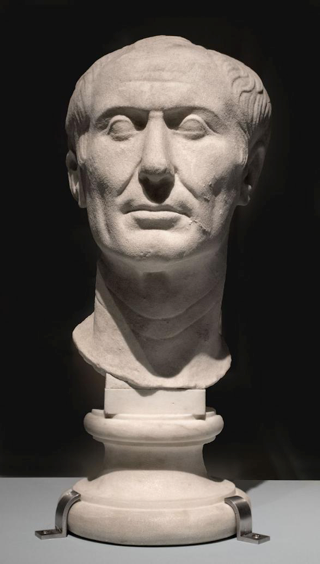 To keep the Julian calendar in alignment with the earth’s revolution around the sun, the 6 hours were added up over 4 years as an extra day of 24 hours in the month of February. This was called a leap year, which had 366 days. With respect to the leap year, it had only one rule –

“Any year exactly divisible by 4 would be a leap year”

History of the Gregorian calendar
In 1582, Pope Gregory XIII adjusted the calendar by moving the date ahead by 11 days and by instituting an additional rule to the leap year –

This new rule, whereby a century year is a leap year only if divisible by 400, is the sole feature that distinguishes the Gregorian calendar from the Julian calendar.

Following the Gregorian reform, the average length of the year was 365.2425 days, an even closer approximation to the solar year of 365.242216. At this rate, it will take more than 3,000 years for the Gregorian calendar to gain one extra day in error.

The Gregorian calendar was designed to keep the vernal equinox on or close to March 21, so that the date of Easter, remains close to the vernal equinox. Easter is celebrated on the Sunday after the ecclesiastical full moon that falls on or after March 21. This shows that the Gregorian calendar evolved from a lunar calendar, since in order to locate the full moon, a calendar based on the cycles of the moon phases is necessary.

BC and AD is a notation system introduced by Dionysius Exiguus, a 6th century monk. This system distinguishes eras as
AD – anno Domini – “the year of Our Lord” and
BC – “Before Christ”.

Many people do not appreciate the fact that the abbreviations AD and BC profess the Christian faith. Many non-christian religious scholars were aware of this, and hence a neutral way of denoting the year was devised.
CE refers to “Common Era” and
BCE refers to “Before the Common Era”.

Just like AD, the CE system counts the birth of Jesus as year 1.

It is also interesting to note that there is no zero. The numbering starts from 1 AD or 1 CE as the year of the birth of Jesus Christ. This is because Europeans did not have the concept of zero at that point in time. The Roman numerals did not have a zero. Zero actually travelled from India all the way to Europe. The astronomers and mathematicians found zero to be a very powerful concept. But those who used it were put to stake or burnt, because it was considered the work of satan.

Now that we have mapped astronomical cycles to timekeeping on earth and the variations in the way these cycles are considered for timekeeping, let us understand the Hindu Vedic calendar, also called as Panchangam.

Fig. 2
– By Xaonon- Own work, CC BY-SA 4.0, https://commons.wikimedia.org/w/index.php?curid=56258488
A Synopsis of Elementary Results in Pure and Applied Mathematics by G. Shoobridge Carr.
Astrology of the Seers by David Frawley
Light on Life : An Introduction to the astrology of India by Robert Svoboda and Hart de Fouw