– How to calculate the thithi

We have looked at the various cycles used for timekeeping.
To summarize,

The tropical year is about 20 min shorter than the sidereal year due to the precession of the vernal equinox, which causes it to move retrograde or backward in the rashi chakra.Hence the sun reaches the vernal equinox faster.

The Hindu calendar, as also the calendars of ancient civilizations all over the world, are luni-solar.

The Hindu units of time

Before going into the calendar, it is necessary to understand the Hindu units of time. The time scales in the Hindu tradition range from 10^-8 seconds (Truti, the base unit) to 10^22 seconds (lifespan of Brahma, the creator of the current universe).

The Western timekeeping is based on solar time. The solar day is divided into 24 hours of 60 minutes each. Hindu timekeeping is based on sidereal time, with respect to the fixed stars. The reference that is used for calculations is 0° Aries.
The sidereal day, called nakshatra ahoratram, is divisible into 60 ghatis of 24 minutes each. Sidereal hours, minutes and seconds can be expressed in terms of solar hours, minutes and seconds, and are sightly longer.

However, as an approximation, sidereal measure and solar measure of hours, minutes and seconds, can be considered equal.

The sidereal year, varsha, begins when the sun enters 0° Aries, and is completed when the sun has traversed through 360° of the rashi chakra in 12 months.
As we have seen, the starting point, 0° Aries is calculated using the nakshatra Chitra and locating the point 180° opposite it. (The figure, given in Part 2 of this article, is shown here as Fig. 1 again)

The sun’s entry into 0° Aries generally falls on April 14 of the Gregorian calendar. 14th of April marks the first day of the traditional Tamil calendar. The same date in April is observed by most traditional calendars of the rest of India – Assam, Bengal, Kerala, Odisha, Manipur, Karnataka, Punjab etc.
This also coincides with the traditional new year in Burma, Cambodia, Laos, Sri Lanka, Bangladesh, Nepal and Thailand. The Hindu units of time are shown in Fig. 2 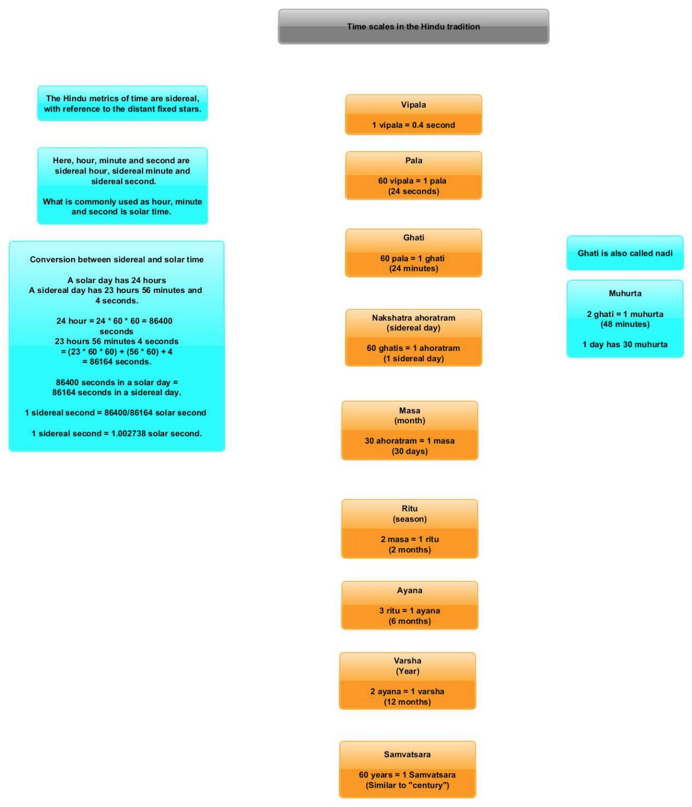 The Panchangam is a calendar based on both solar and lunar cycles. It indicates both the phase of the moon and the time of the year (the location of the sun in the rashi chakra).

The solar and lunar cycles tend to mirror one another –

A thithi or lunar day is defined as 1/30th of a lunar month, or the time it takes for the longitudinal angle between the moon and the sun to increase by 12 degrees. 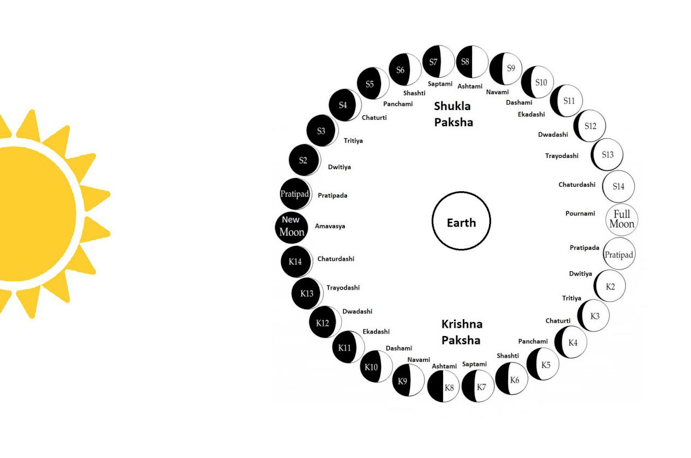 How to calculate the thithi

1.Find the longitudinal difference between the sun and the moon by subtracting the sun’s longitude from that of the moon. (If the moon’s longitude is less than that of the sun, add 360°.)
2.Divide this distance by 12°, and drop the remainder. (To divide, convert the minutes into degree by dividing by 60)
3.If the quotient is 15 or less, quotient + 1 will be the number of the thithi of Shukla paksha. If the quotient is more than 15, subtract 15, and the result will be the number of the thithi in the Krishna paksha.

The quotient 6 is taken and the remainder is dropped.

Hence, the thithi running is the 7th thithi, Saptami.

Since 7 is less than 15, it is Saptami of the Shukla paksha.

The time duration from one sun rise to the next sun rise is reckoned as a vasara in Panchangam. This duration is equal to 24 hora (hora is modern hour of 60 minutes).

There are 7 vasara in a week, 7 being the number of the primary grahas in Vedic astronomy and astrology. Each vasara is presided over by a graha. That is how the vasara are named.

Vasara and thithi : As the time duration of thithi can vary from 21 hours to 26 hours, the thithi’s beginning and end occur at different times of the vasara, which has 24 hours. Sometimes, a vasara can have 2 beginning points of successive thithis.

The names of the vasara in English, Sanskrit, Tamil and their presiding grahas, are shown in Fig. 5

Just as a solar day is divided into two portions as day and night, the lunar day or thithi is similarly divided into two karanas, of 6° each.
11 different karana are permuted to make up the 60-karana monthly cycle.
Of the 11 Karana, the first 7 are considered chara (movable) karana. The last 4 are considered sthira (fixed) karana. 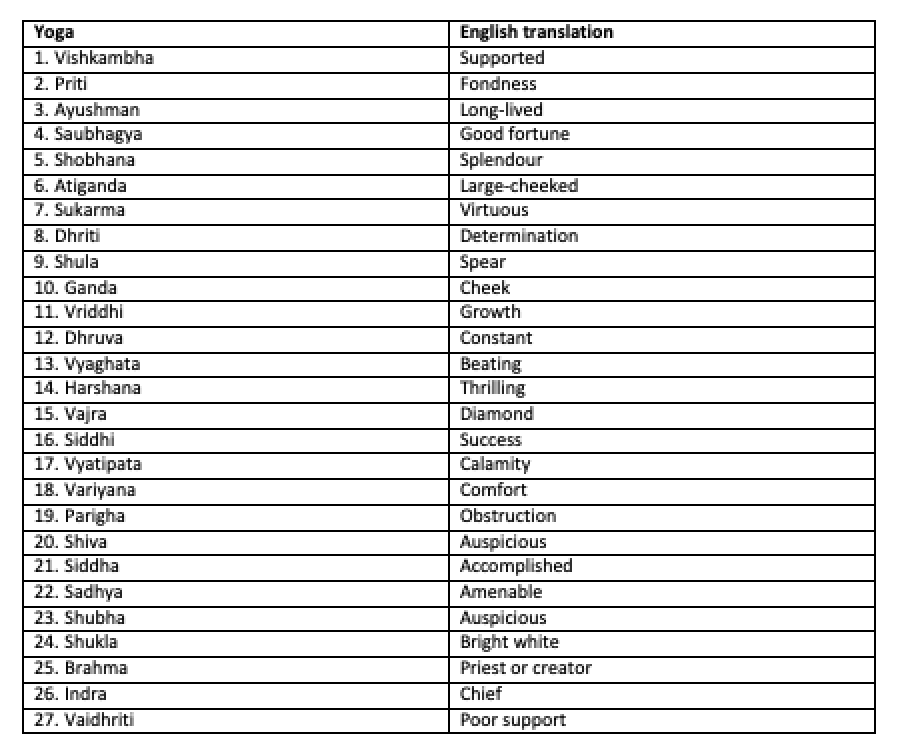 How to calculate the yoga

4)The quotient + 1 will be the number of the yoga.

Nakshatra in Panchangam refers to the lunar constellation in which the moon is located. There are 27 nakshatras, as we have seen in Part 1 of this article. It is shown here again in Fig. 6

Relationship of nakshatra and masa (month)

The month in the Panchanga is based on the solar cycle. The start of the month is considered to be 0° entry of the sun into a rashi. The 12 rashis correspond to the 12 months. Each month has days varying from 29 to 32.

Many of India’s regional calendars name their months after the nakshatra in which the moon will sit (or sometimes, will be near to) when it is full. The first month of the Hindu calendar corresponds to the spring month when the full moon occurs in the nakshatra Chitra, and the month is known as Chaitra. Table 4. shows the relationship of the lunar months with the nakshatras. This is also shown pictorially in Fig. 7. 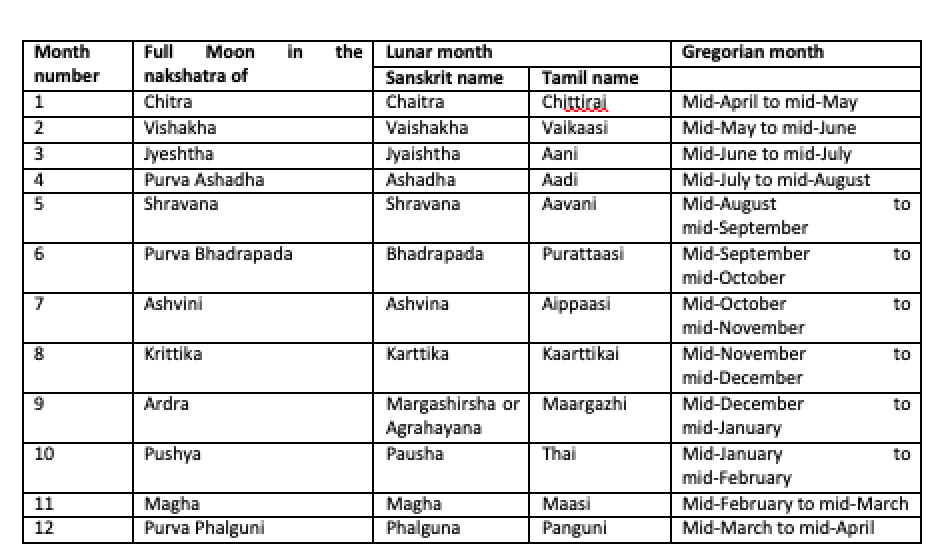 Table 4. Relationship of nakshatras and months

Fig. 7 – Nakshatra of the full moon and masa

All the Hindu festivals and religious holidays in India are dated using the Hindu luni-solar calendar, not the Gregorian solar calendar.
In the Western system, there are 4 seasons – spring, summer, autumn and winter. In the Indian system, there are 6 seasons, as 2 months make for a season, ritu. The ritu are Vasanta (spring), Grishma (summer), Varsha (monsoon), Sharad (autumn), Hemanta (winter) and Shishira (prevernal*)
Table 5. shows the relationship of masa, ritu and festivals.

*Prevernal is the period from the end of winter and beginning of spring.

The 60-year cycle is common to both North and South Indian traditional calendars, with the same name and sequence of years. After the completion of 60 years, the calendar starts anew with the first year. This corresponds to the Hindu “century.”

Brihaspati chakra
Jupiter has a sidereal period (with respect to fixed stars) of 11 years, 314 days, and 839 minutes, which is almost about 12 years. Its synodic period* brings it in conjunction with the sun every 398 days and 88 minutes, which is a little more than a year. Thus, Jupiter in about 12 years and sun in one year pass through the same series of nakshatras. So a given year can be dated as the month of a 12 year cycle of Jupiter. A collection of 5 such cycles or 60 years is called Brihaspati-chakra, and each of the 60 years has distinct names, given in Table 6. 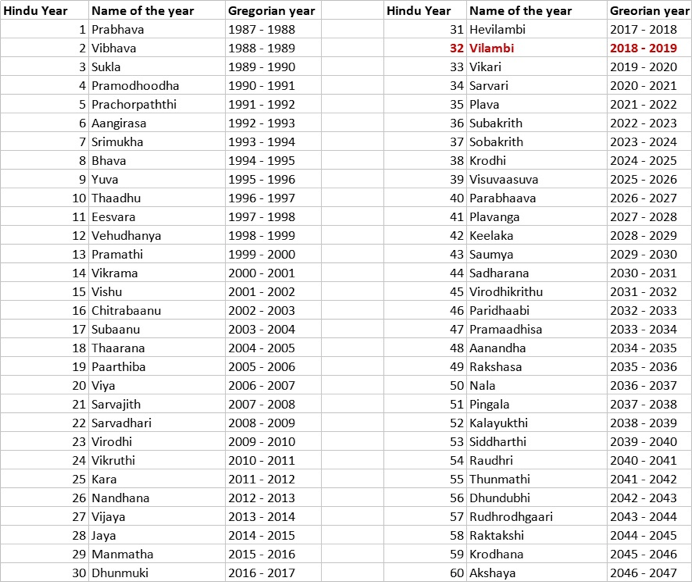 Samvat refers to era. Several Indian calendar systems use the era or Samvat to provide a historic reference, like how the Gregorian calendar uses the Common Era which has the birth of Jesus Christ for its historic reference. Vikrama era refers to the coronation event of the legendary king Vikramaditya in Ujjain. Currently we are in 2075 Vikram Samvat.

The Hindu Panchangam is a luni-solar calendar that keeps time based on both solar and lunar cycles in parallel.

Light on Life : An Introduction to the astrology of India by Robert Svoboda and Hart de Fouw
The Calendars of India by Vinod K Mishra
https://arxiv.org/ftp/arxiv/papers/1007/1007.0062.pdf