In Indian astronomy the movement of several celestial objects are described from the perspective of the observer on earth. Be it the path of the sun, moon or the position of the planets on the zodiac, the visualizations are based on what they look from a particular point (latitude and longitude) on earth.

Retrograde motion has captured the imagination and fascination of Indian astrologers and astronomers. The sanskrit name for retrograde is vakra (meaning reverse or crooked).

Retrograde motion is an apparent reverse movement of a planet for an observer on earth due to variations in the speed of movement of earth and the planet under observation. So planets seem to move eastward, stop at a point and then start moving westward and then stop and move eastward. This is a repeating pattern.

While inferior planets (planet in between the sun and earth i.e mercury and venus) seem to make a zig zag motion in the sky, superior planets (beyond the earth) seem to form a loop during this retrograde motion.

To elaborate this, let us take the example of mercury. It takes only 88 days to go around the sun. While it appears that it is going ahead of the earth, at some point when it is coming back on its next revolution it appears to be behind the earth. Hence for an observer on earth, it would appear that mercury was moving from east to west and now from west to east. It is purely based on perspective change.

For superior planets the pattern appears slightly differently. Take Mars for instance. It takes 687 days to go around the sun. The earth takes 365 days. Every 26 months, the Earth catches up with Mars and moves ahead of Mars. It now looks like Mars is moving backward.

The synodic period is the period between the successive conjunctions of the planet with the Sun. When a planet is seen in the same line as the sun from the earth, it is said to be a conjunction. The moon is in conjunction with the Sun during Amavasya (new moon). 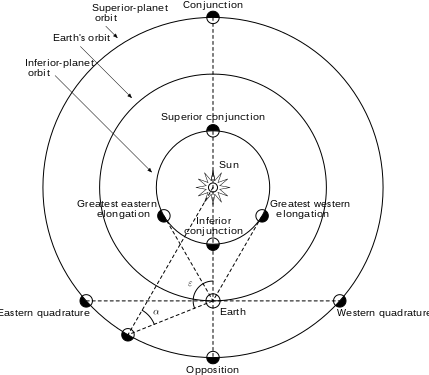 Here are the retrograde motions for 2020. It is interesting to note that several planets seem to to be in retrograde during a certain months. We leave it to the astrologers to interpret.